This year, not only am I doing PAX, I’m also going to DragonCon the following week! I hear that those folks in Atlanta take their costuming pretty seriously, so I had to make sure that my costume was up to par. I chose Hawke from Dragon Age 2, because I haven’t done a fantasy costume yet, and I already look a bit like the title character from the cinematic intro.

Update: My friend Nate Zimmer did some really amazing photos of this finished costume. You can check out his photography here and see the full Dragon Age 2 photoshoot here. 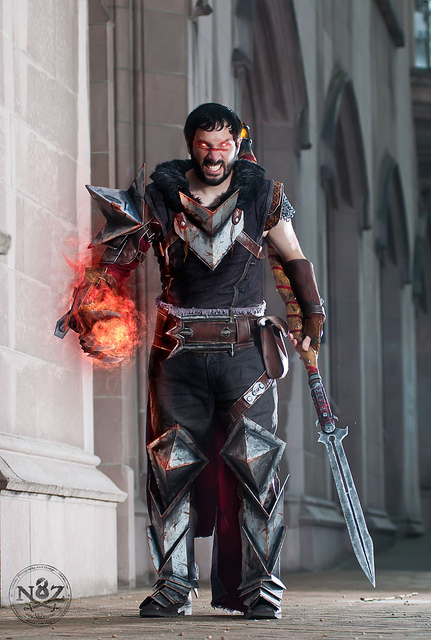 I planned on using all foam PVC for the armor, but to start with I built it all out of cardboard and masking tape. This way, I could easily adjust it for size and look/feel before committing to carving up plastic. 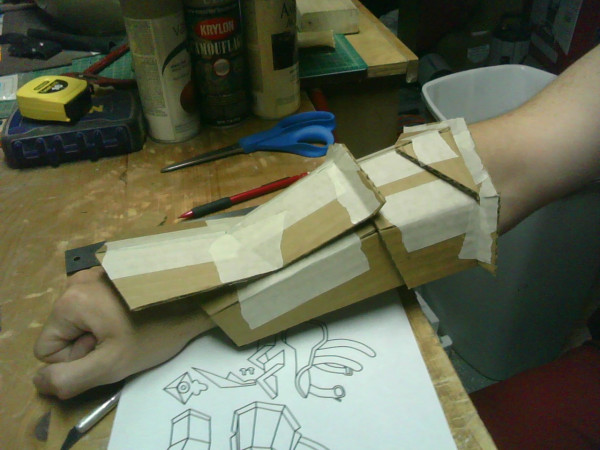 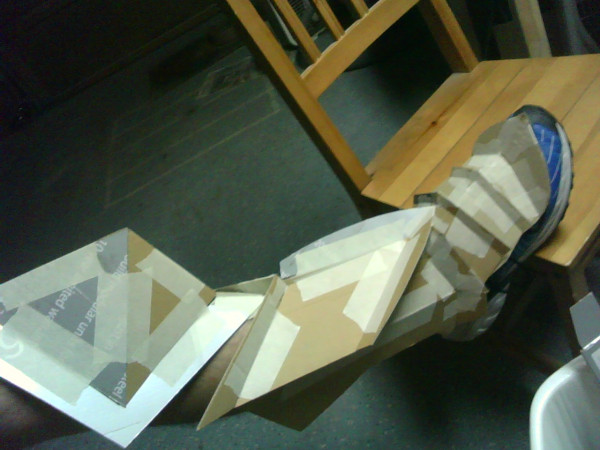 Once I had all of the pieces planned out, I cut each flat section out from 1/8″ foam PVC. Nearly every piece of the armor was flat, so I didn’t have to bend anything. This made the construction very straight forward. Each seam was connected with fiberglass for maximum durability. 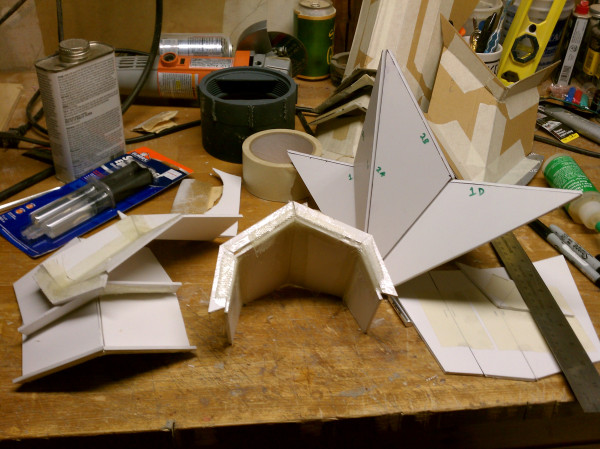 The seams on all of the armor pieces were filled in with Bondo and sanded down smooth. My goal was to make sure each piece was made out of a single piece of metal as though it had been forged. I also added “battle damage” cuts, dents and scrapes in the PVC to aid in the weathering later on.

Once all of the armor pieces were finished, they were all primed black and then painted with silver Rub ‘n Buff. In hind sight, I could have probably just used a metallic spray paint and got nearly the same look in far less time, but at least it looked right. 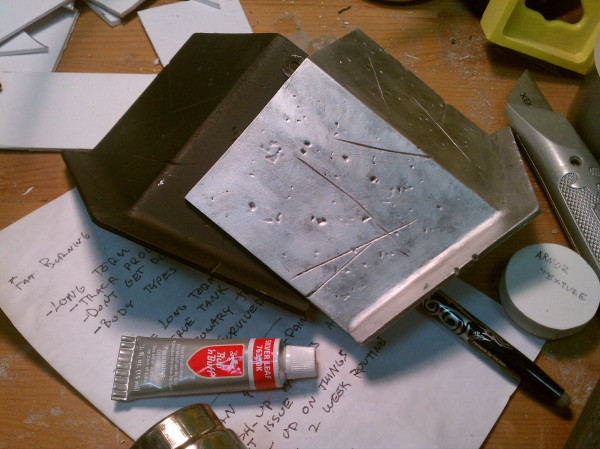 The armored gauntlet was a fun challenge. I ended up making each finger segment out of two pieces of foam PVC that were epoxied together. I then heated the pieces and formed them around the glove with my finger inside. Then, each finger segment was epoxied straight to the leather, overlapping so that the fingers could still bend (for the most part).

With all of the armor pieces assembled, I went and weathered the armor pieces. I just used black and burnt sienna acrylic, a paint brush and paper towels. This was pretty tedious, but it really helps sell that it is real, battle-worn metal armor. 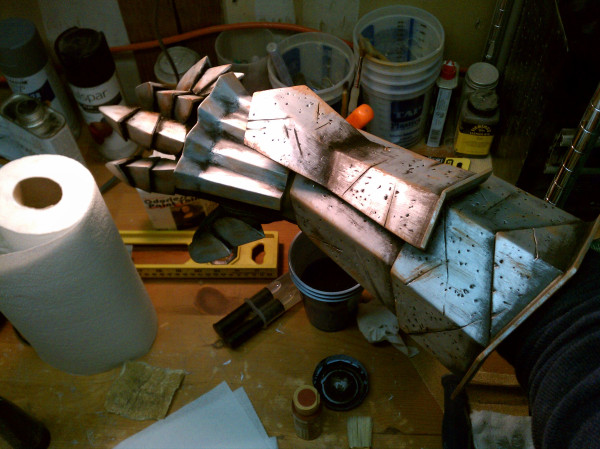 The doo-dads on the neck armor were sculpted out of Sculpy and painted with acrylic. 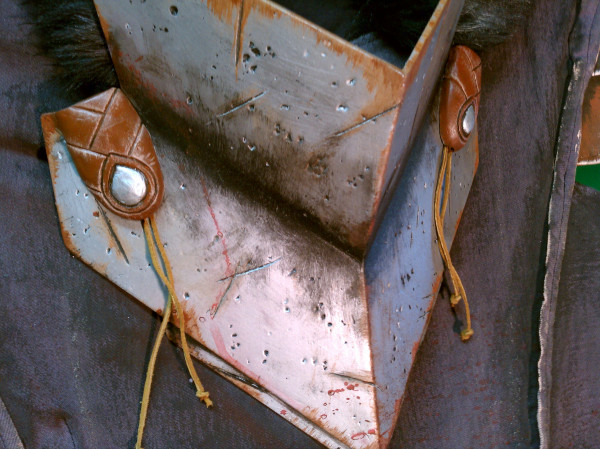 There is a tiny bit of chainmail on the upper left arm. I went all Lord of the Rings on this. It’s just PVC pipe that I sanded, cut into rings and wove like real chainmail.  Then I sprayed it with a black primer and silver spray paint. 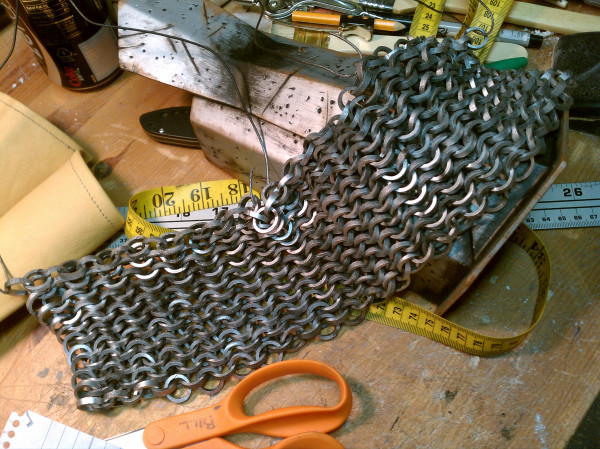 Unfortunately, I didn’t take many photos of the tailoring aspect of this costume. Here’s the breakdown:

Here’s a shot of the belt in progress: 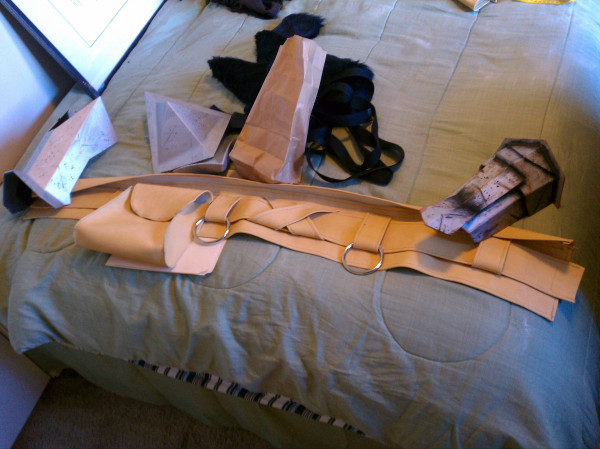 Now, onto the staff!  The blade was cut from a piece of 1/4″ foam PVC (my favorite medium). 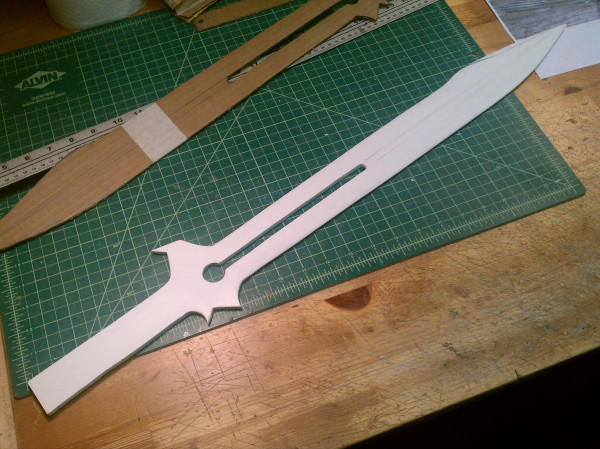 The blade got the same treatment as the armor. Weathering scratches/dents, primer, metallic paint, and black acrylic weathering paint. 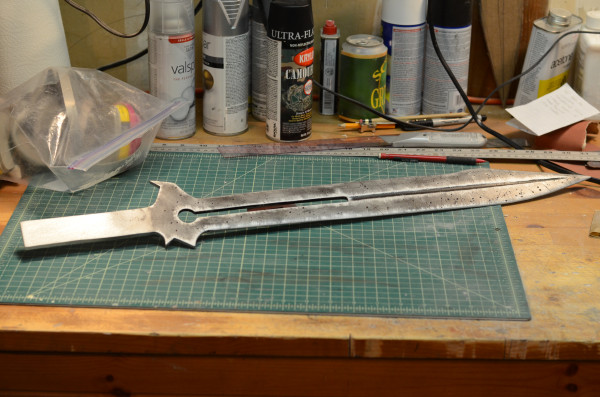 The shaft of the staff was made from three pieces of 1″ x 3″ wood that were glued together. I carved the wavy, branch-like shape using a reciprocating saw and a belt sander. I also made lots of manly grunts. 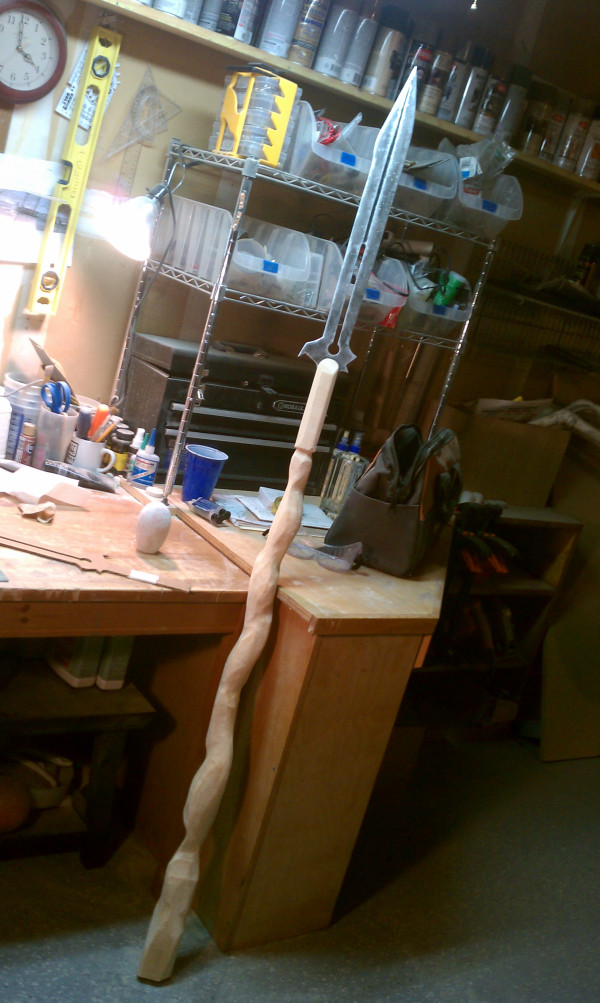 The orb thing on the base of the staff was made from cardboard and Bondo. I made a cross section of the shape I wanted out of cardboard and filled it with resin, then sanded it down to the egg-like shape. The tentacles around the orb were made from Sculpy. A 1/4″ bolt went through the base of the Sculpy and into the wood to attach it. The orb and tentacles were all epoxied together. 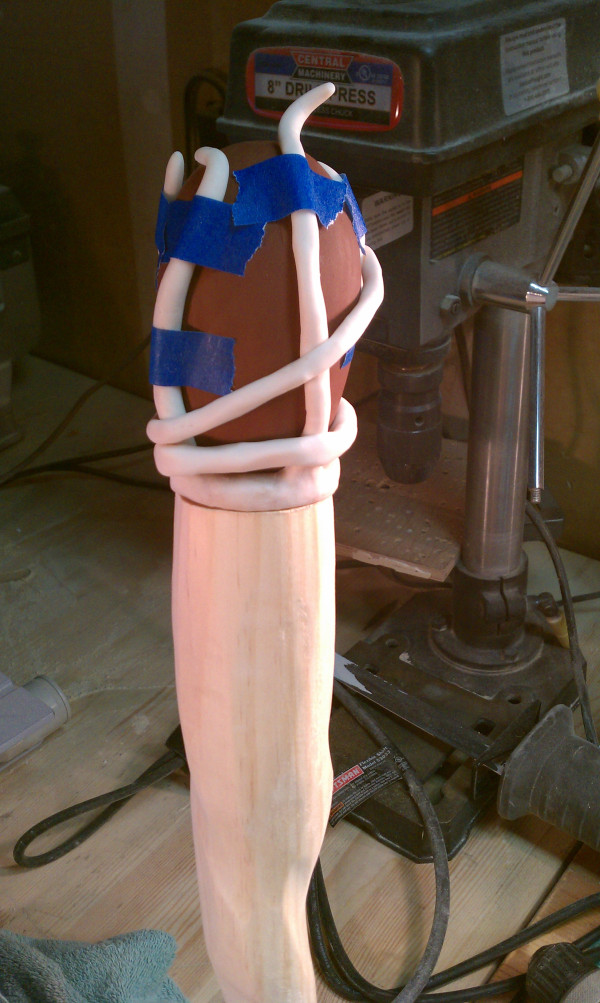 The rest of the staff was finished with stain and black acrylic paint. I wrapped a red  band around the shaft and red string around the base of the blade. This was all held down with epoxy. The metal dots on the shaft are some fancy upholstery tacks that I found at Ben Franklin’s. The spike things on the base of the blade were cut from 3/8″ foam PVC. The bands of metal on the shaft are craft foam that was epoxied to the wood and painted to look metal. Finally the orb was painted with acrylics. 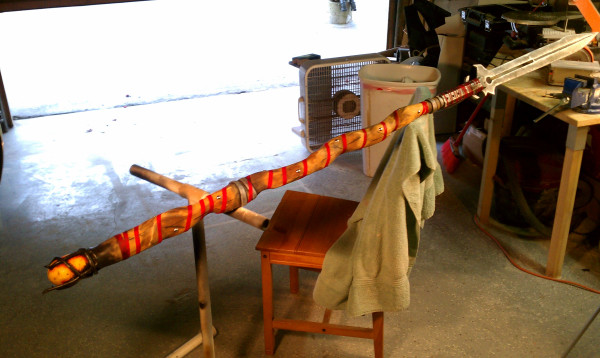 That’s it folks! The costume is complete! You can see more photos of the costume on my flickr page. 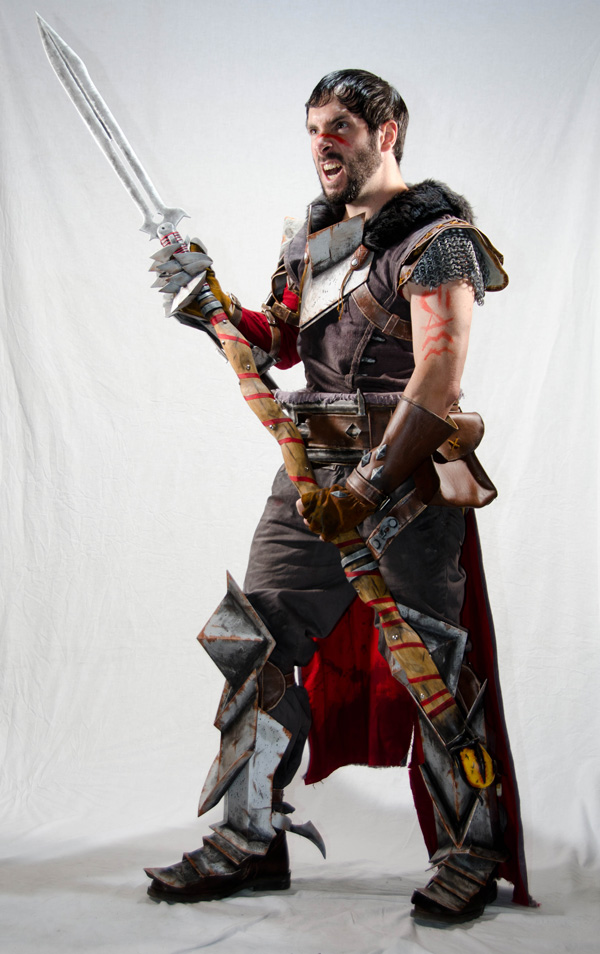 I took the costume to PAX 2011 and DragonCon 2011 and I got some really great responses and feedback! I even got my photo taken with Felicia Day! 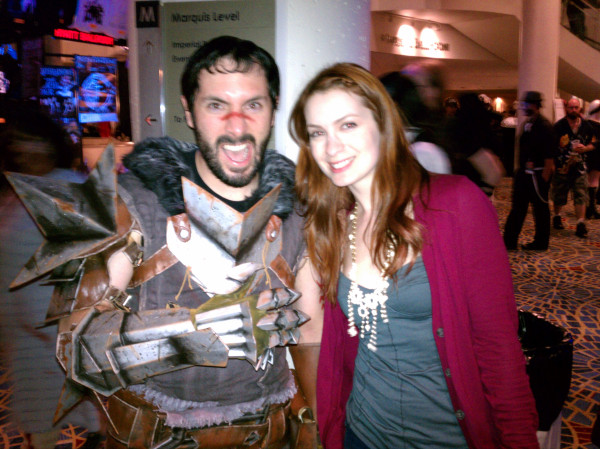 We are a participant in the Amazon Services LLC Associates Program, an affiliate advertising program designed to provide a means for us to earn fees by linking to Amazon.com and affiliated sites.
This website uses cookies to improve your experience. Clicking "accept" will allow us to continue with their use, but you can opt-out if you wish. Cookie settingsACCEPT
Privacy & Cookies Policy