A while back, my friend Jessica Nigri commissioned me to build something new for her. If you recall, I built the Risty mace & shield from Queen’s blade (10 part build video here) for Jessica. Anyway, she wanted the rifle and sword from Nausicaä and I was happy to oblige! 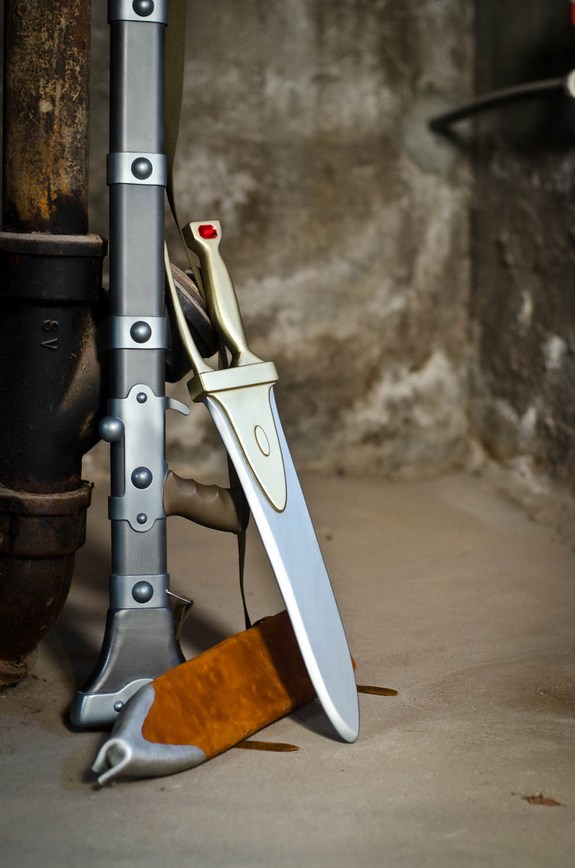 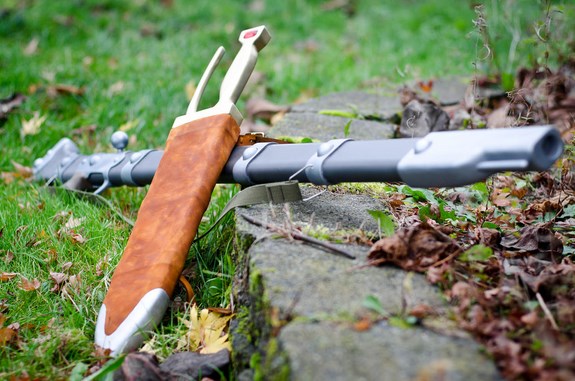 Like always, I drew up a schematic for both of the items (you can get my files right here). Getting reference images for these guys was kind of tricky, but I found some images of a toy figure that were SUPER helpful. 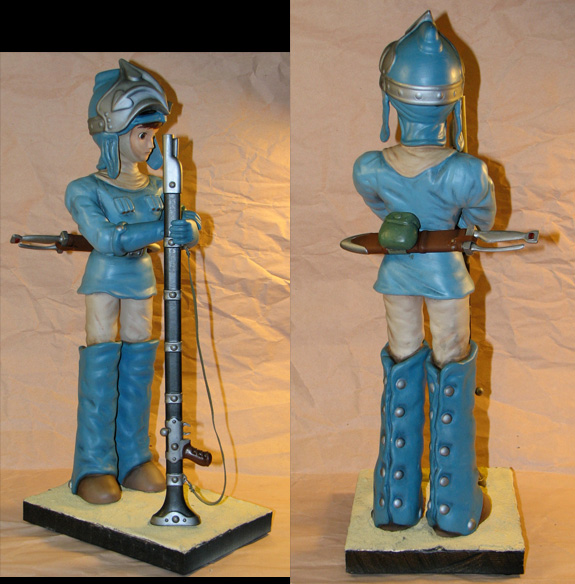 I decided to make the sword from layered Poplar. It ended up being a combination of layers in 1/4″ and 1/2″ thicknesses. These were all cut out using a scroll saw. Each layer was adhered together with wood glue and a ton of clamps. 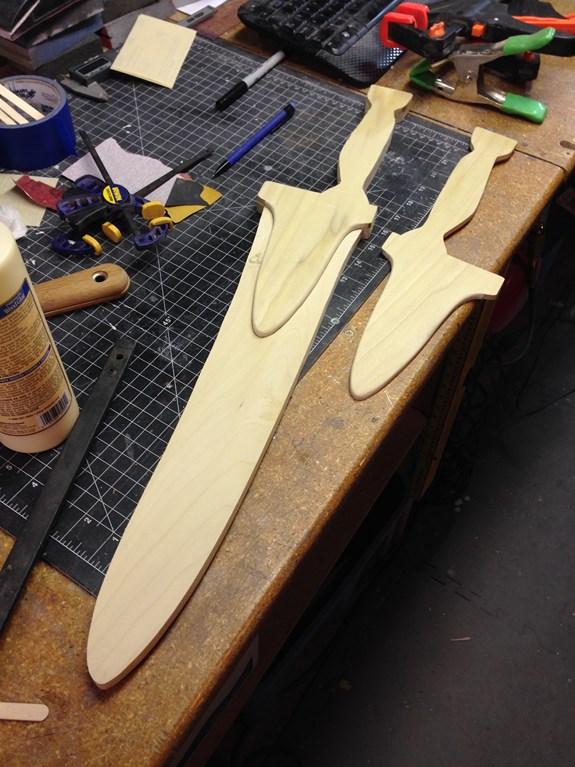 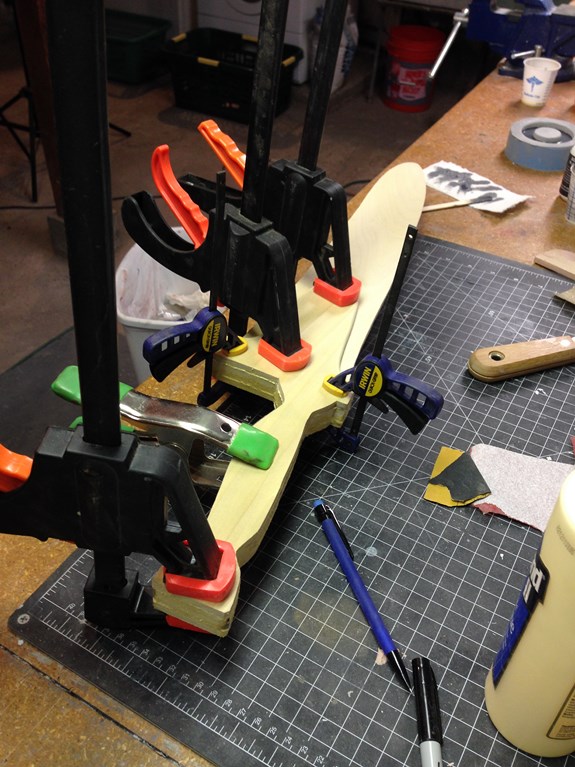 The handle and finger guard pieces were shaped using a rasp bit in my air powered rotary tool. They were then smoothed down using a drum sanding bit in the same rotary tool and finally hand sanded. The finger guard was glued in place with a threaded steel rod drilled into both the guard and the hilt, for added strength. Also, the little embellishment oval piece on the blade was a 1/8″ piece of MDF, cut with a scroll saw. 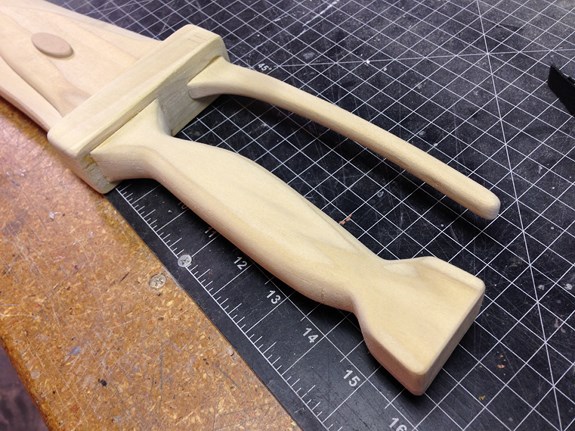 Before painting, I filled in any indents with a combo of Bondo and an air drying spot putty (not pictured)

This thing is stupid big. Like, to the tune of 5 feet long. At that scale I figured that the barrels should be about 1.25″ wide, so I got a couple of PVC pipes and glued/screwed them together. The seam between them was then filled in with a whole bunch of Bondo and sanded down to make it look like one solid piece. 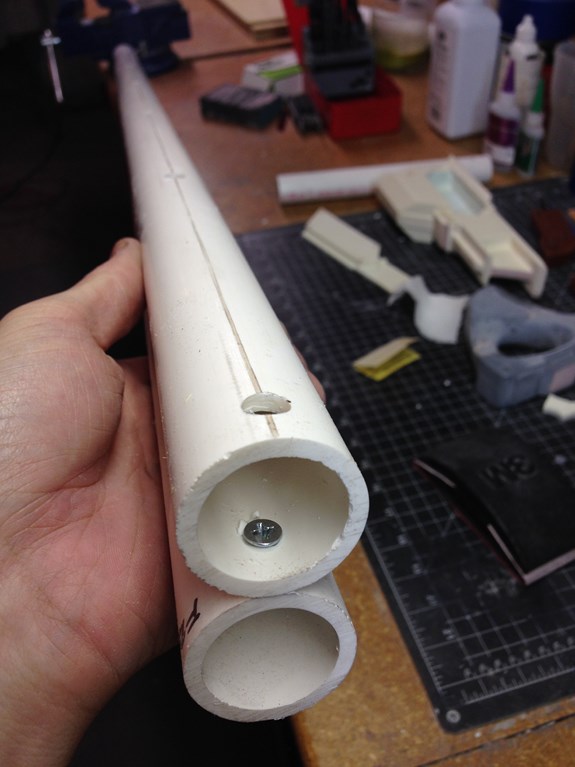 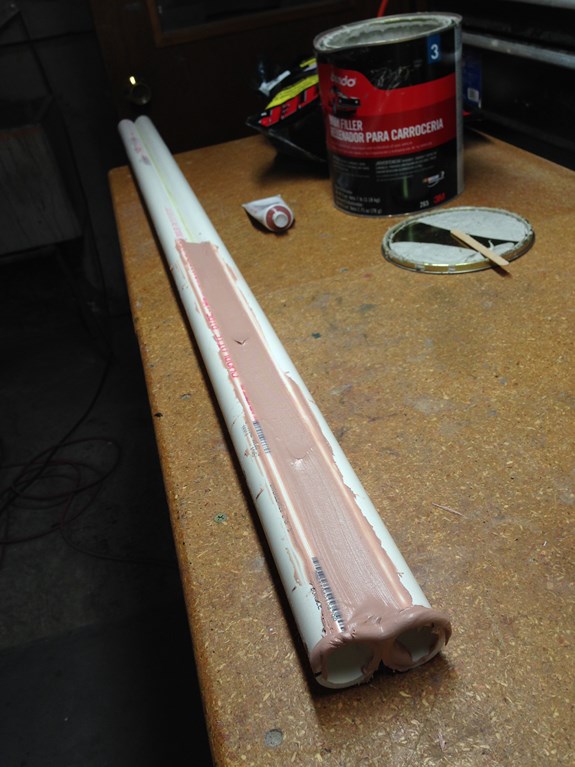 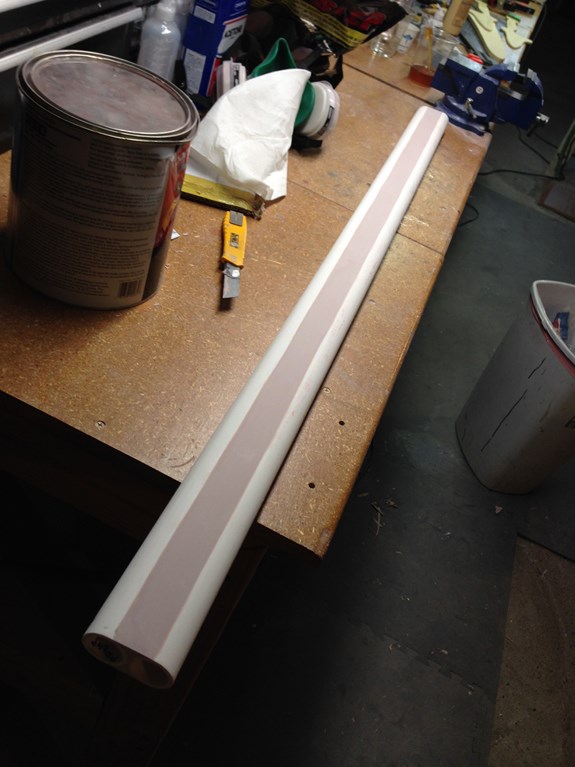 The bands around the barrel were made from 1/8″ foamed PVC sheet. I cut the sheets to the correct width/length, heated them with a heat gun, and CAREFULLY (seriously, this stuff gets hot) formed them around the barrels. Once I had them made, I epoxied them into place around the barrel. 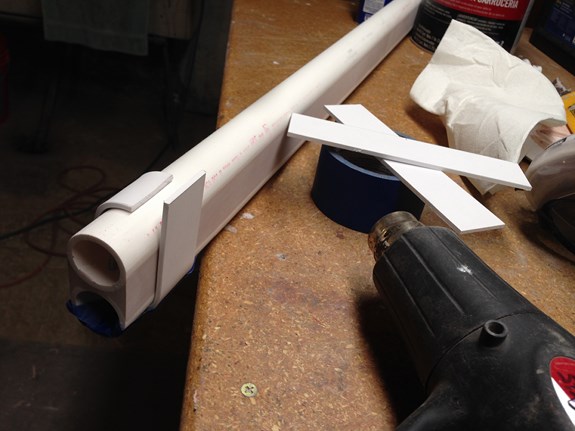 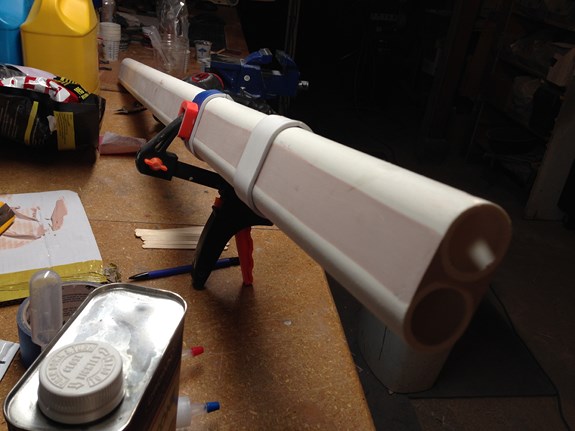 I also wanted the rifle to be able to break down in size for easier transport, so I cut the barrel in half at one of the bands. I left the band hanging over a little bit to hide the seam when assembled. Eventually I put smaller diameter PVC pipes into the barrel ones so that they could be snugly pushed together and held securely (not pictured). 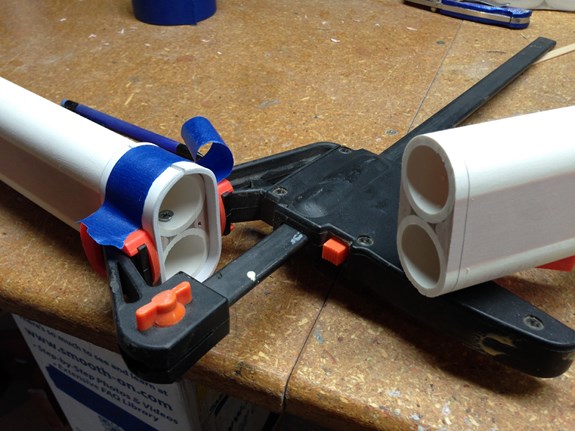 The bolt assembly by the gun handle was a pretty tricky beast. I opted to use more heat formed 1/8″ foamed PVC sheet, same as the bands. I bent a full sheet, then traced the pattern onto it and roughly cut it out with my rotary tool and a cutting wheel. Once the shape was close, I used a sanding bit to clean it up.

Also pictured is the gun handle that was rough cut from a couple of sheets of 3/4″ thick poplar that had been glued together. 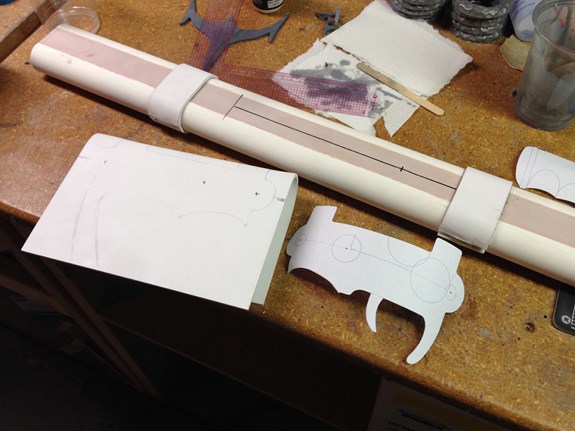 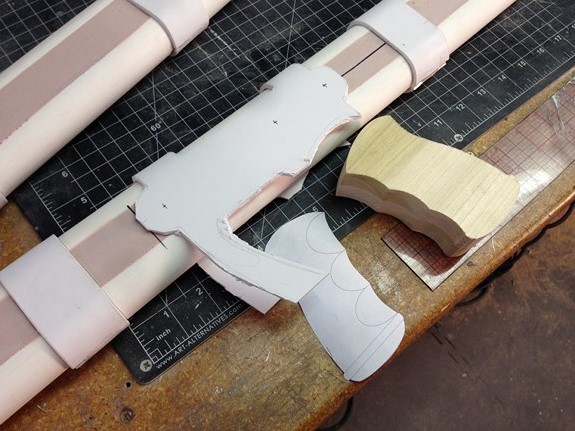 The bolt assembly got more heating/forming and refining. I also added a long steel bolt through the barrel to attach the handle to later on. The hole that I drilled for that bolt was covered up by the bolt assembly piece. The goofy looking trigger guard was glued together on the bottom of the barrel. 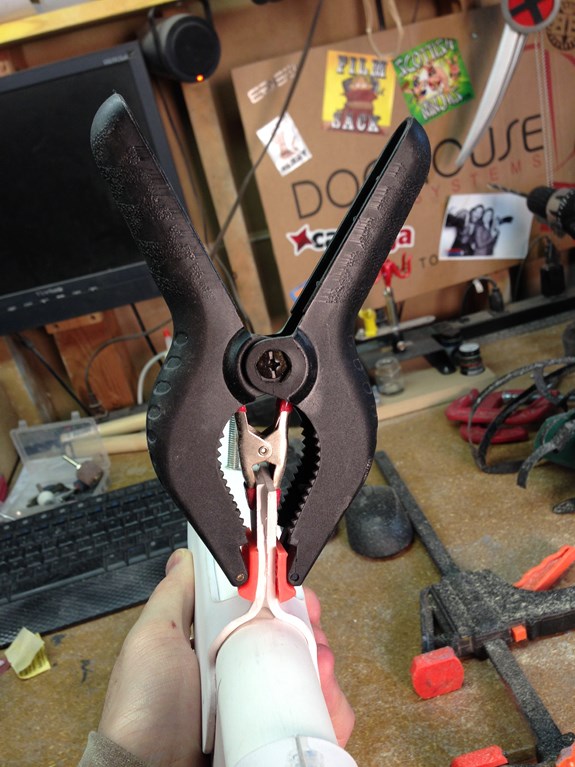 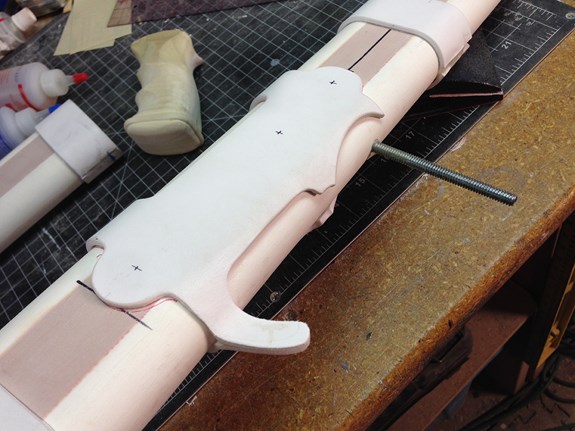 The gun handle, shoulder stock, and barrel end piece were all made from two, scroll saw cut layers of 3/4″ poplar wood, glued together. They all got the rotary tool/rasp treatment to shape them. I also drilled holes in the pieces that needed to slide onto the ends of the barrel. This was kind of tricky and terrifying to do with a spade bit. There were also… complications. At one point I ripped through the side of the barrel end piece. This needed to be filled in with Bondo later.

The wider part on the shoulder stock is a piece of 1/8″ MDF, glued down before the whole thing was shaped with the rasp. 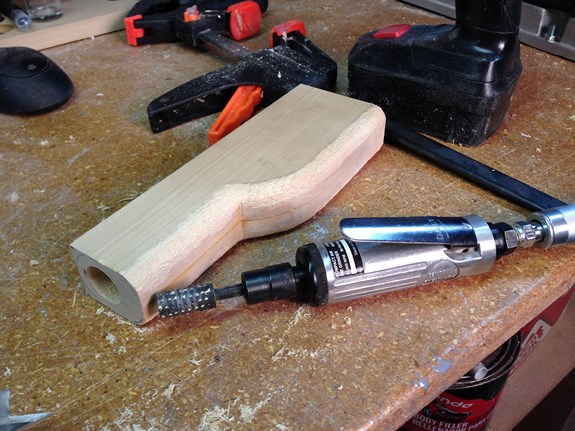 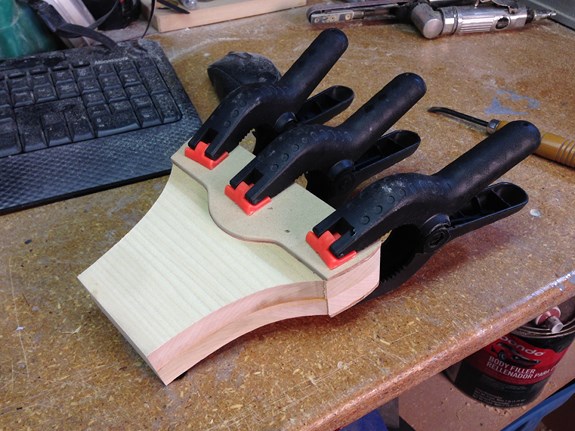 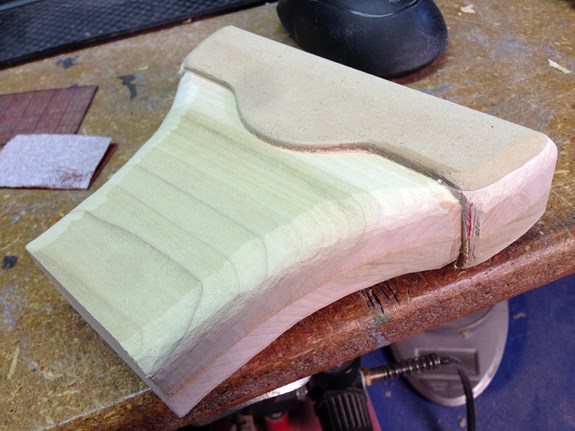 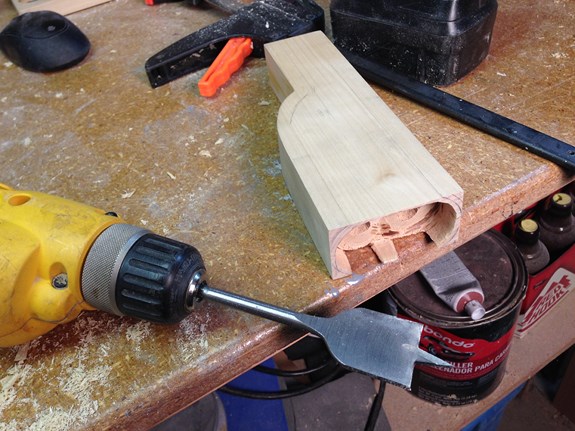 Once the holes were drilled all nice like, the wooden end pieces were epoxied into place on the ends of the barrel. I also drilled a hole into the gun handle to accept the long bolt that I had added earlier. 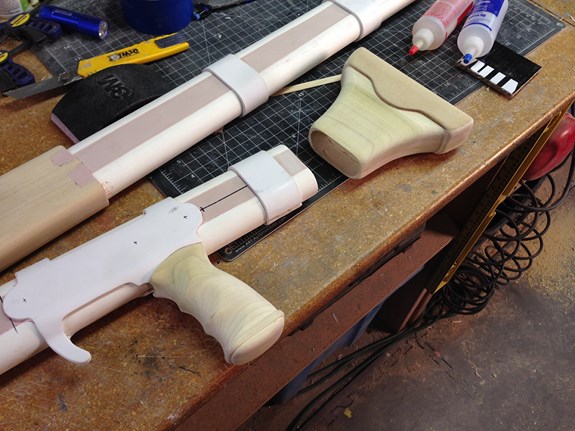 All along the barrel, on the bands and on the bolt assembly part, there were a bunch of circular detail things. I decided to make them from different sized hemispheres of acrylic plastic that I bought from the local Tap Plastics. I sunk some holes into the barrel with a Forstner bit in my drill press to accept the hemispheres. The half spheres got a quick sanding and then were epoxied into place. 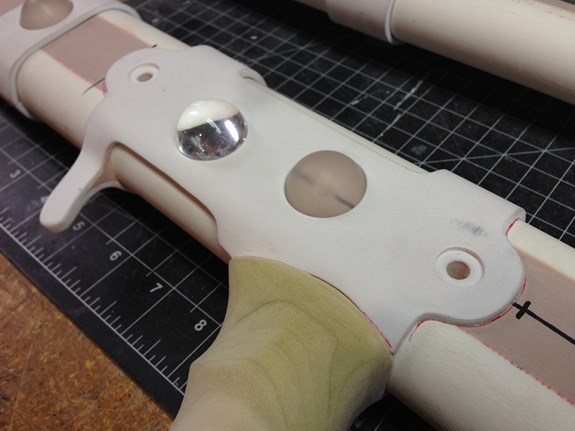 With the lion’s share of the assembly finished, they needed to be painted. I wanted them to look just a touch more real than the cartoon that it was based on, so I went with a slightly more metallic scheme. Of course, everything was primed and sanded a bit first. 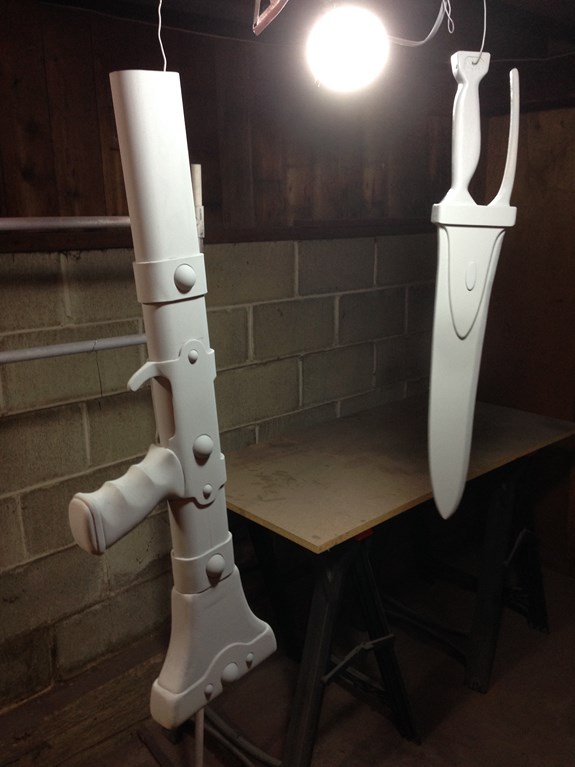 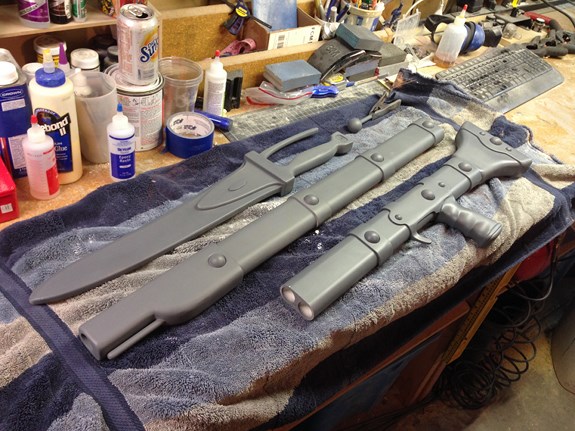 I used Model Master’s Buffable Metalizer Lacquer and my airbrush for the gun and sword metal bits. The three colors I used were gunmetal, stainless steel, and brass. For the most part, this process consisted of masking, painting, and sealing. Then rinse and repeat. The handle was airbrushed with acrylic paints. 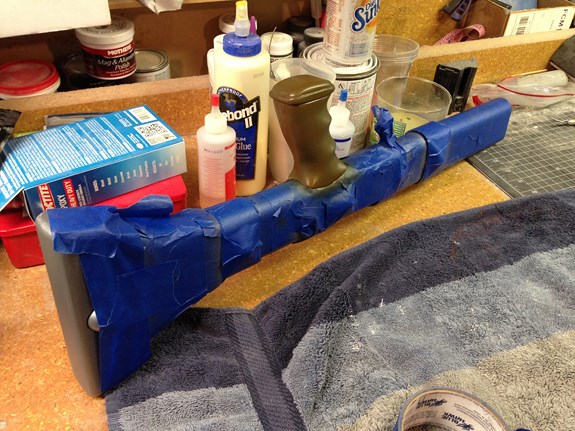 The final piece for the sword was the two gems on either side of the pommel. These were just plastic gems that I got from Michael’s craft store. 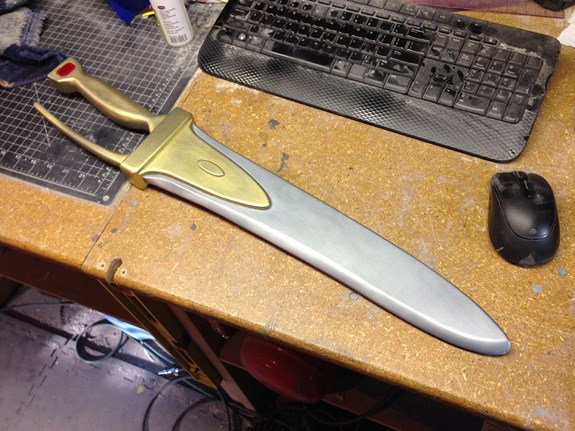 The sword also has a neat looking scabbard to go along with it. I decided to flex my leatherworking muscles a little bit and make this from a piece of cow hide. This was a bit outside of my comfort zone, but I had the materials on hand so I went for it. I made a form in the shape of the scabbard out of MDF, wet a piece of leather, and wrapped it around the form, letting it dry overnight. 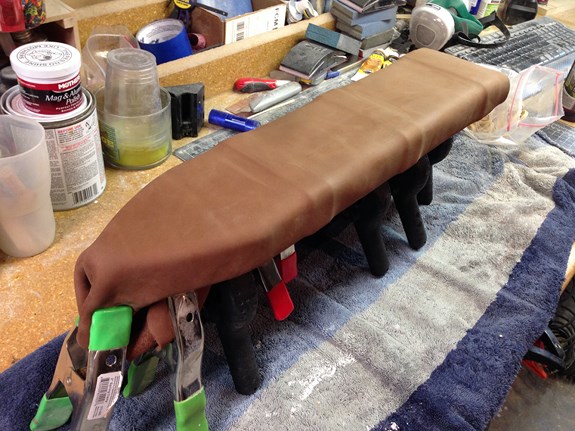 The back side of the scabbard was stitched up. 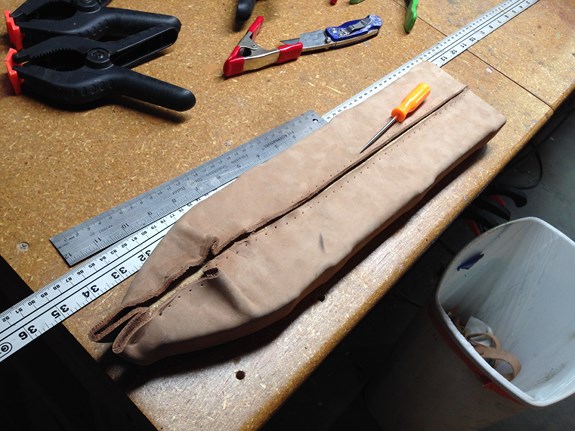 And finally the leather was dyed and the end was painted with a metallic acrylic paint to match the reference. A strap was attached to the barrel of the gun and the entire thing was completed! 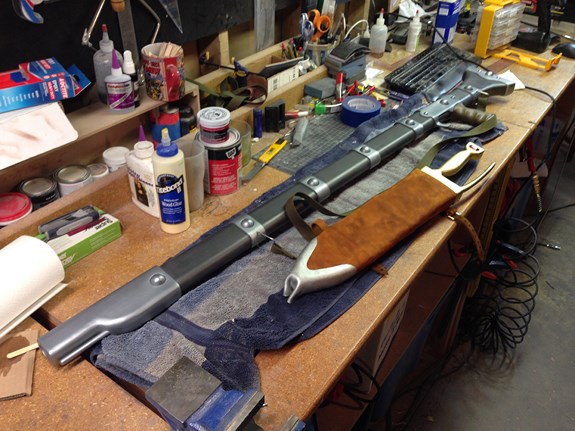 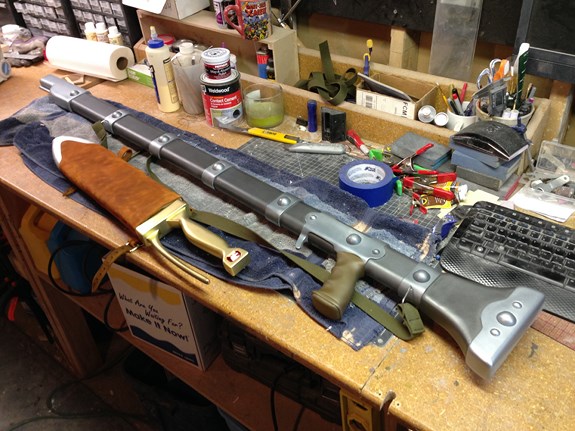