I had an extraordinary time at Phoenix Comiccon this past weekend. The only bummer was a single crappy experience I had with a stranger. It didn’t ruin the con for me, but it’s been really tough to get off my mind, so I’ve decided to share it with you. My hope is that some of my audience who are new to the con scene will learn what is and isn’t cool to do when interacting with a stranger at a convention.

Also I was pretty rattled and needed to get it out there and off my chest.

A teenaged kid approached me while I was in costume and without warning decided to show me a knife he had just purchased. It scared the hell out of me. I immediately got convention security and they responded without hesitation. 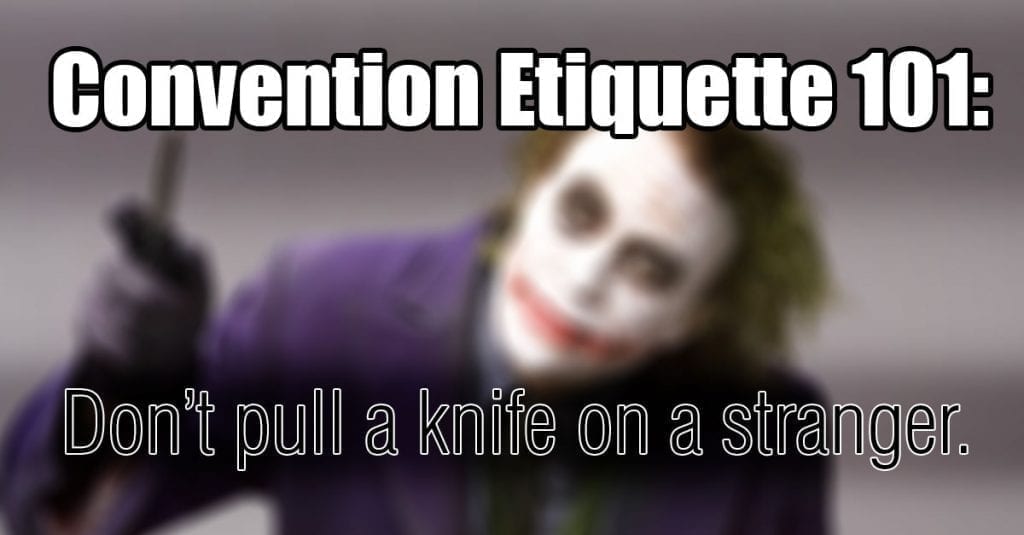 The blow-by-blow.
It was about an hour from closing time on Sunday. We were just finishing up an amazing convention weekend at my friend’s booth. My pal Steven and I were hanging out in costume in front of the booth. The crowd was in a rare lull when a teenage kid approached me. I didn’t recognize him, but he seemed to at least have some idea who I was. I wasn’t at all put off by this since people had been approaching me all weekend long to take costume photos or talk prop and costume making.

The kid opened by saying, “Hey, want to see something I got?” Clearly he had just purchased something neat and wanted to share it with me. Again, nothing weird about this. I get stoked about buying new toys too. So I said something like “Yeah, sure man!”

Note: He did NOT say “Want to see this new knife I just got?” To which I would have replied “Nah man, keep it stowed.” He kept me in the dark until the last possible moment.

He pulled a small mechanical looking thing out of his pocket. I couldn’t tell what it was right away, so I leaned in for a closer look. Then he snapped it open. Turns out it was a spring assisted, double edged pocket knife, themed to look like the one the Joker used in the Dark Knight.

I nearly pissed my armor.

I pulled back right away and then froze while he enthusiastically tried to show me the writing on the blade, completely oblivious that he had just pulled a knife on a stranger.

Another note: The words on the blade were “Why so serious?” For real, this kid pulled a knife on me while quoting a fictional, murderous sociopath.

When he did look up, he saw that I was wide eyed and terrified. He mumbled a bit and struggled with the mechanism to close the knife. For those brief awkward seconds, I was trembling. I clutched my prop gun in my hand and made ready to bury it into his temple if he came a millimeter closer to me.

Finally he put the knife back into his pocket, we had brief exchange that amounted to me desperately urging him to remove himself from my presence, and he left. The entire ordeal lasted just moments, but it felt like an hour had passed. I turned to Steven and said “Did you just see that?!” He slowly nodded, just as bewildered as me.

And then I swore out loud a lot.

My first reaction was to get out of costume and find security. It took me about 10 minutes but I tracked the kid down, flagged a convention security member, and they scurried after him to handle it. Kudos to the amazing reaction by the Phoenix Comiccon staff.

After the fact.
Now that I’ve had some time to think about what happened, I have some thoughts. For starters, if you want a really good primer on self defense, read this article by Sam Harris. For me, someone with only a tiny bit of martial arts experience, a lot of that stuff has been running through my brain. In hindsight, I should have clocked the kid as soon as I saw the blade. (edit: Or I should have moved away quickly. This is a reference to the “fight or flight” instincts most humans have in response to a scary situation. I did neither, opting to stand there dumbfounded like a dufus)

Also, why is a vendor at a con selling a double edged (or made to look double edged), spring assisted knife? Double edged blades are made for one thing: people killing. There is nothing more terrifying than being at close range with an assailant wielding a knife. I would rather he had a handgun to my head. Want to know why? Watch this video here (NSFW language):

Finally, who else did this kid pull a knife on? Was I his one special friend that he wanted to share his new purchase with or did he scare the shit out of anyone else? It’s horrifying to think that he might have.

In conclusion.
You might think “Oh Bill, the kid didn’t mean any harm, he was just excited about his new purchase, wanted to share it with his favorite prop maker, and you were never in any real danger.” Ponder this: For a brief moment, I had to consider whether or not this stranger with a knife meant to do me harm and if he did, there was probably nothing I could have done in time to stop him. Nobody should have to go through that, especially at a comic book convention.

It seems like it should be a no-brainer, but for reals you guys, don’t pull a knife on a stranger at a convention.