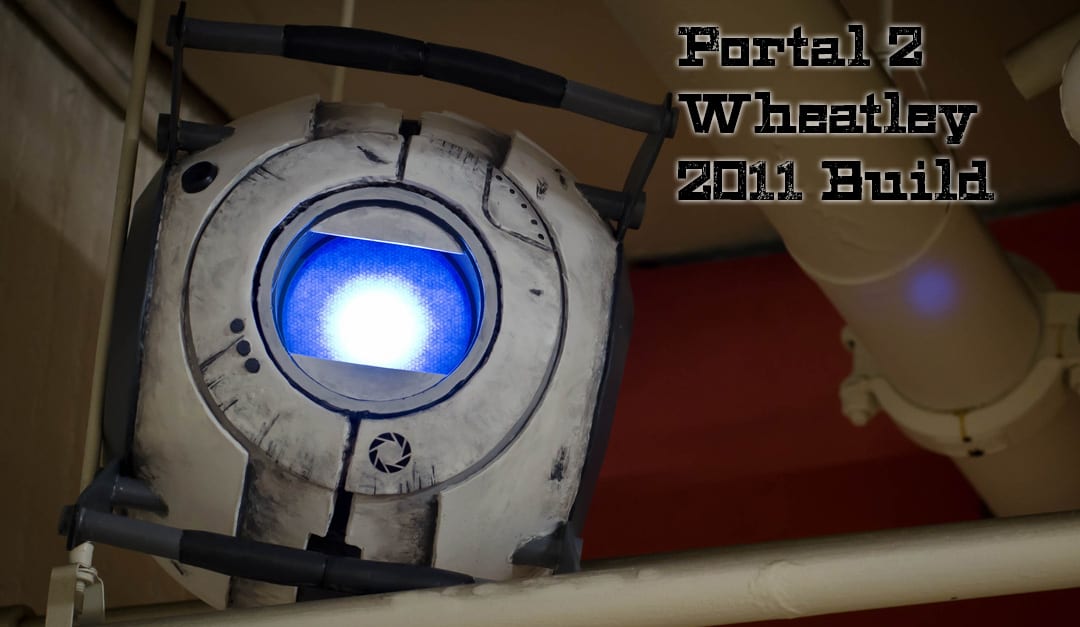 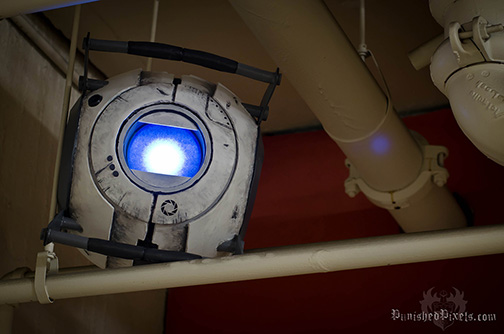 Build and write-up by Brittany Doran.

2011 was a huge year for Bill and I. Living in Seattle, we would go to PAX Prime each year. In 2011, PAX was a week before Labor Day, so the convention didn’t overlap with DragonCon! We decided to hit up both conventions–because we’re crazy. After our first DragonCon, we decided, as cosplayers, that we would pick DragonCon over PAX for future years. DragonCon is a costume paradise! That year, Bill met Harrison, from Volpin Props, who gave Bill sage advice that went something like “dude, just quit your day job and make props for a living.” That’s when it all started.

So, Wheatley. He was my first scratch-build prop. I learned a ton of things not to do and also a few techniques I still use today. Before we get to Wheatley, I want to highlight two bits of my Chell costume. 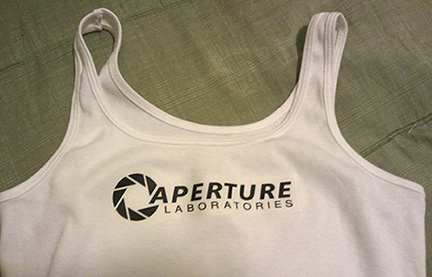 Create your design in a photoshop program, or just look for a pre-made vector on Google Images. Print it out on this special transfer paper and iron it onto your clothing!

Pros: You can make the exact size you want and place it just like the reference image.
Cons: I got the “won’t crack on stretchy cloth” kind, but that was full of lies. The transfer began to crack from stretching, so I had to carefully pull the shirt over my head and only hand wash it. This was the only down side, so if you’re putting a decal on non-stretchy cloth, go for it. 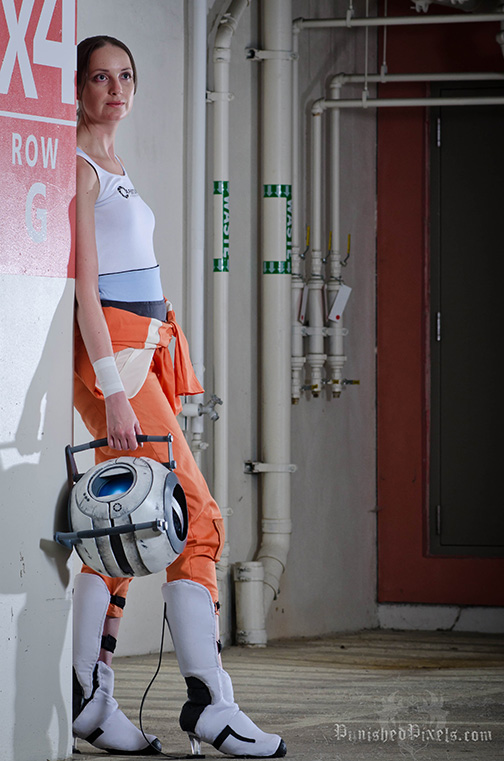 The only recommendation I have from my Chell boots build, is to use clear acrylic high heeled shoes. I saw another Chell cosplayer at DragonCon who had real-working, spring boot supports. It looked incredible. She was also sitting down the whole time I saw her because the balance and pain were too great to stand for more than a few minutes. Boots that uncomfortable are only good for photo shoots and, at that point, you might as well photoshop out the acrylic heel.

Pros: Acrylic heels FTW.
Cons: The rest of my boots–crafted with layers upon layers of mistakes. A few years later, Bill was commissioned for Chell boots and they look awesome.

Use Bill’s tutorial to make your own Chell boots. 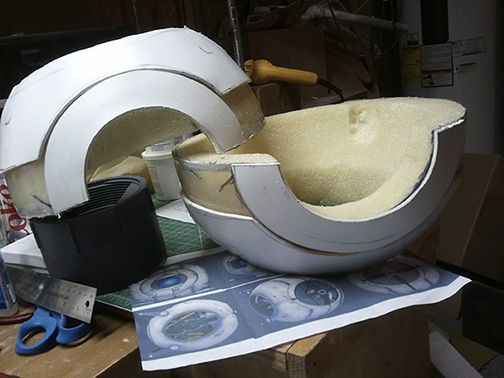 For Wheatley’s body, I purchased two plastic, different-sized spheres online. The globes were designed to be those giant ornaments hanging in department stores for the holidays. The website I purchased from doesn’t exist anymore, but they looked like this.

Pros: The plastic sphere provided a strong support structure to attach the rest of Wheatley’s pieces.
Cons: None, I’d use the plastic sphere over a styrofoam sphere for this project. Styrofoam would have to be covered in Resin, then Bondo, then sanded for a billion years. 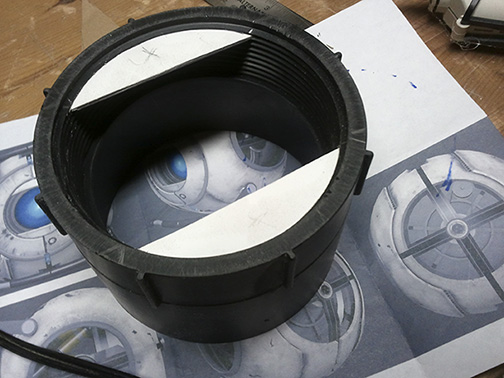 Wheatley’s eye was based on a random plumbing part. I should have hacked off most of this eye piece. This plastic is heavy. The eyelids are cut from styrene. I created Wheatley’s honeycomb eye pattern (gradient and all) in photoshop and printed it out on normal paper. I put some shiny transparency plastic, from a notebook binder, in front of the paper and shoved it in the plumbing eye piece. I should have used hard, clear acrylic for the printed paper support–the floppy plastic is lumpy. For the light, I just glued a gigantic flashlight in there.

Props: The plumbing piece has a cool look and the flashlight is pretty bright. The printed honeycomb design looks great in pictures.
Cons: Stupid heavy. Need to lift more, bro. 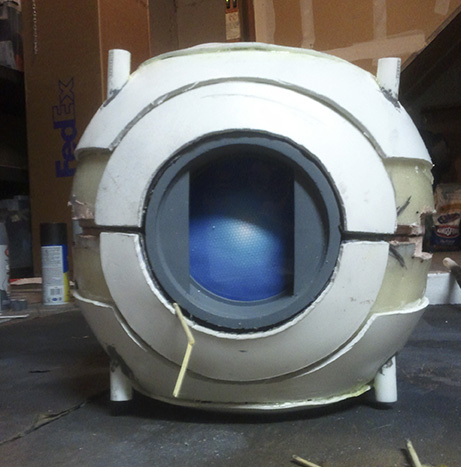 The plates on the outside of Wheatley are PVC plastic.

With what I know now, I should have covered my plastic sphere in duct tape, drawn on the pattern, and cut out the templates to use for the PVC plastic pieces. I didn’t do that. The pieces were extremely difficult to free-form onto the body and still have nice seams. I didn’t get nice seams, but Wheatly is battle damaged, so we’ll just go with that.

5-Minute Epoxy: This is what I used to glue almost everything together. If you need to add epoxy after your prop is finished, make sure to paint over it. The epoxy on Wheatley that is exposed to the elements has turned yellow over the years, which is noticeable on his white paint.

I used Bondo to fill in places where the expanding foam was on the surface. 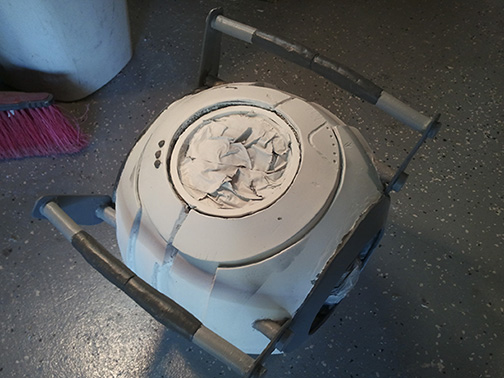 For the handles, I used styrene and PVC pipes. I thought for sure the styrene would snap off, but that stuff has just enough give and strength to survive.

Pro and Con: The handle is sturdy, but I also went easy on it. I don’t think the the styrene would hold up to abuse. For something that thin, I probably should have used metal.

I don’t want to talk about the handle wraps…OK, fine, I will. Every time I learn a new technique, I tend to lean heavily on it and find all the weaknesses of said technique. I just poured Epoxy over masking tape and rapped it around the handles, creating something that was an eternal pain to sand and never looked right. I now know costumes should be mixed media, since every material has its strengths. I should have used actual cloth wrapping tape, which would have been more comfortable to hold anyway. 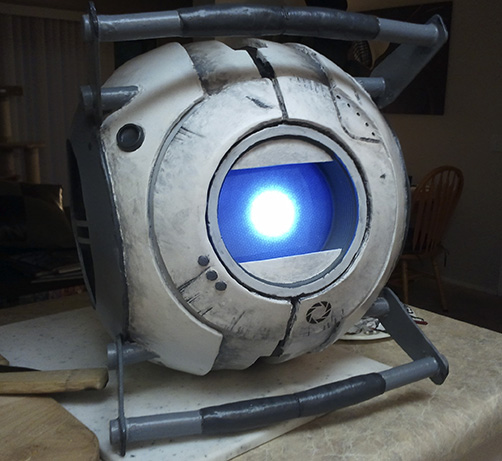 The weathering for this project is what hides all my lumpy plastic crimes. I used a dremel and needle files to scratch up Wheatley’s shell and went to town with acrylic paints. The little aperture beauty part was just printed on paper and I super glued it to the plastic. A little bit of weathering paint covered up the paper seam.

Wheatley still sits on a shelf in our living room, next to much newer props. But I still love this old prop. Looking at Wheatley is a reminder of how much I’ve learned over the years. It makes me want to keep learning, keep making mistakes, and keep making props. 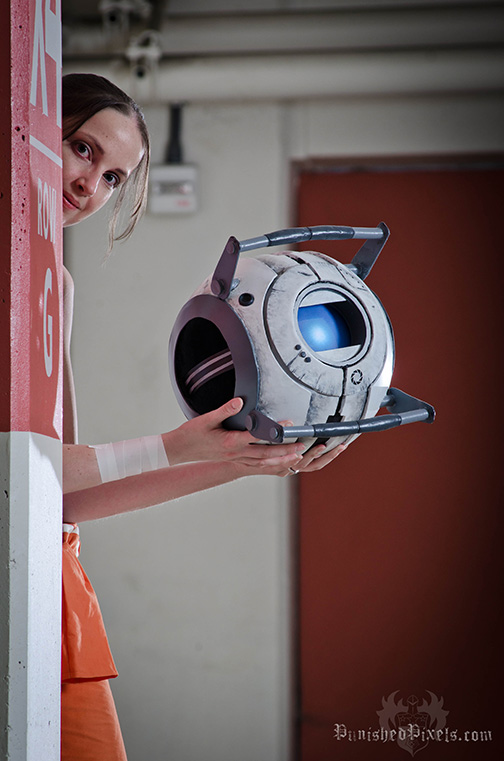