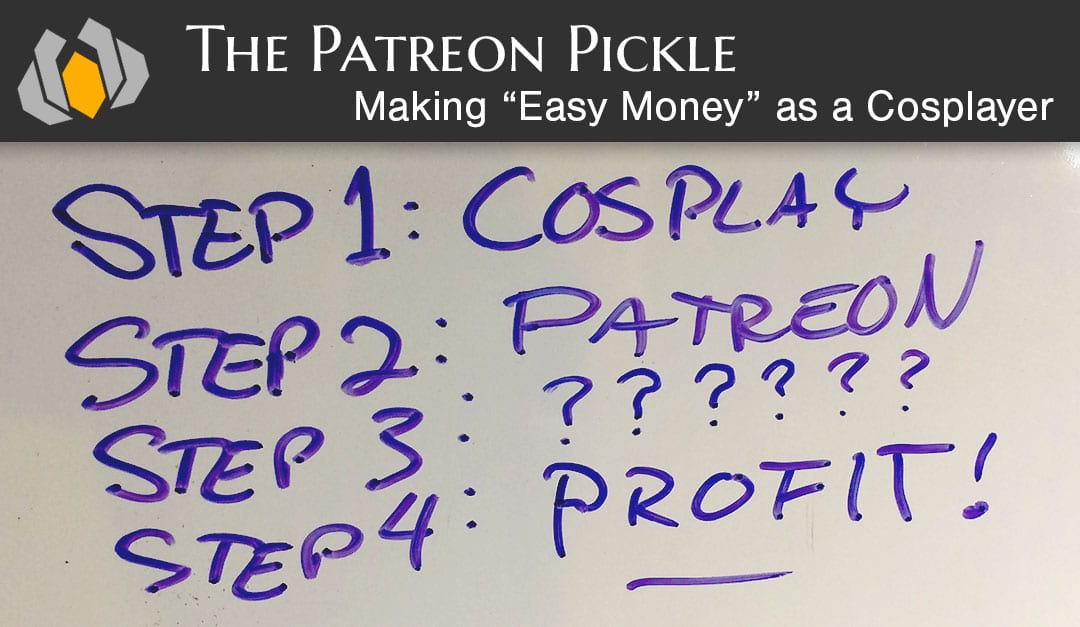 Every so often, a hot topic will cause a bit of a kerfuffle in the cosplay community. This go ‘round, people seem to have their knickers in a twist over the abundance of cosplayers starting up their own Patreon campaigns to earn a little cash for their creative efforts. For those not in the know, Patreon is a platform that offers creators an easy process for collecting funds from their fans to help support their particular brand of creativity in exchange for gratitude or goodies.

Patreon can be a really amazing method for creators to get paid for their work straight from the people who enjoy said work. Brittany and I have been running our own campaign for some time now to support our Prop: Live weekly technique Q&A show and it’s been instrumental in helping us see a return on the hard work we’ve put into the show.

Since Patreon streamlines the “asking for money” aspect of the creative process, many people have jumped on the bandwagon to see if they can collect a little scratch from those who enjoy what they do on the internet. This, it appears, is what folks seem to take issue with: the wholesale “begging for cash because I cosplay” aspect of crowdfunding. We’ve seen this same backlash with previous funding efforts through Kickstarter, GofundMe, etc. in the past. To the naysayers I proclaim: “Let them ask for money.”

We should be encouraging the funding of creative projects! Does that mean every cosplayer deserves to have money strewn at their feet because they hot glued two pieces of foam together and wore it in public? Of course not, but many of these creators do deserve to earn money from their efforts and we’ll never even hear about them if the knee-jerk reaction is to throw shade every time a cosplayer holds out their hand!

If we discourage creative people from asking for money, then good, valuable projects will be less likely to get funded. Sure there’s an abundance of poorly conceived projects asking for funding out there, but that’s been a historical norm for all art forms and I promise you, the cream will rise to the top. Plus, if you don’t think a project deserves money, don’t give them your money. Captain Planet said it best: “The power is yours!”

What if you’re one of those creative people who wants to start a campaign? Well then I’ve got some great news for you: you can start today. Here’s some tips for creating a successful Patreon campaign.

First off, I’ve managed my own campaign for a while now and I have several friends and mentors in the podcasting community who have had great success with their own campaigns, so I’ve been able to glean some insight into what makes a good crowdfunding campaign. With that being said, here are some thoughts I have about creating and maintaining a well thought out Patreon campaign. Also note that the following is only one way to run a crowdfunding campaign. Don’t think this is the only way to do it or that it’s a cookie cutter for success.

Create something valuable for your fans that you truly love doing.

For me, our weekly live show is something that I thoroughly enjoy doing. I would do it anyway even if it made me zero dollars. This is a key component. I’ve seen many people ask their fans “I’m starting a Patreon, what do you want to see me do with it?” This seems backwards to me. Blindly asking your audience what they want to pay you to do feels like a sure fire way to ensure you’ll end up doing things you don’t enjoy doing, just to earn a few extra bucks. It won’t be fun and you’ll end up resenting it. Start by doing the thing you love, get good at it, and if people enjoy it, they will be eager to support it with their dollars.

In my experience, every single example of a successful Patreon campaign started as something the creator did for free, usually for years, before asking for money. They built up a massive amount of value on their end that their fans eagerly gobbled up. Then when they held out their hands, the fans happily chipped in.

What type of “products” are a good fit for Patreon? All digital content. The internet is made of it and it’s taylor made to be valuable and deliverable to a large number of people. This could be blog write-ups, photos, videos, podcasts, digital patterns, lessons, live streamed video, or just about anything that you can think of.

Once you’ve started your “thing”, got good at it, and done it for a while, then you can come in with a soft sell on your Patreon campaign. You should note that the product you’re making will remain free forever, but if people want to support it with their money, they can; there’s now an easy way to do so. You can add that if people want to pitch in more, that option exists too, along with bonuses to reward their generosity. These bonuses don’t need to be added to the campaign right away either. It should be a very non aggressive sales pitch.

“Hey guys! Thanks for tuning in to my show for the last few months. Many of you wanted a way to support the show, so I started a campaign over at Patreon so you could help out! Even if you just throw a dollar at the show every month, it’ll go a long way to help us improve what we do every week. Thanks!”

Once you’ve created that valuable thing that people enjoy, do not put it behind a paywall.

Keep the base level of your product free forever. Does that mean you shouldn’t paywall some of your content? Of course not! One of the most powerful things about Patreon is that you can reward the patrons who pay extra with bonus rewards. Be clear that this is extra goodness on top of the base level free product you offer.

If they choose to do so, patrons can throw money at your project and receive no reward. That is totally up to them. Remember that they’re still getting an incredible value by enjoying your product, plus they can feel super satisfied in supporting the work of their favorite creator.

This is a little nit-picky, but don’t call the monetary contributions your supporters make “donations”. That word denotes a “something for nothing” exchange and they are not getting nothing. They get your product (which has value to them) and they give money (which has value to you). This is a “value for value” proposition. Try to use words like “support” or “contribution” when talking about the money your fans pitch in for your efforts. Sure it’s just semantics, but it still bugs me.

Don’t get caught up on getting a big dollar amount from your Patreon account.

It’s better that you get more supporters than cash money, at least when you’re just getting started. The real power of Patreon is the ability to send your content straight to the people who pay for it. Encourage as many of your fans to pitch in, even if they literally only spend a dime on you every month. Once they’re a Patron, you have the ability to send your creations straight to their inbox whenever new content is available. Again, this is the real value of a Patreon campaign. A direct line of communication between people who make things and people who pay for it.

Here at Punished Props, we’ve made one major campaign update in the past year and we’re planning another one in a few weeks. Your campaign will become the thing it wants to be. You just need to be willing to listen to what your fans want and mix it with what you enjoy creating. Be flexible and try new things. Add more reward levels as time goes on. Set goals for your fans to help achieve with you together.

What if you don’t want to ask for money for your project? That’s totally fine too! Don’t think that just because “everybody else” is doing it that you need to hop on the bandwagon. If the satisfaction of the creative process is all that you require from your hobby (as is the case with 99% of all hobbyists) then fantastic! Carry on with your fun projects.

I hope this little bit of insight has helped shine some light on the Patreon storm that the cosplay community has been weathering as of late. I look forward to seeing the creative projects that get funded once the dust settles and the cream rises to the top. This is an exciting time for our corner of the internet and I couldn’t be more stoked!

Do you have your own opinions on crowdfunding in the cosplay community? Let me know on twitter! I would be happy to get some more viewpoints on this complicated issue.